skip to main | skip to sidebar

Blood and Gravy: Dick Cheney at the Jackal's Feast 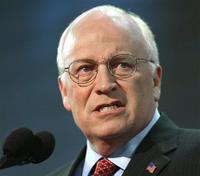 This is a somewhat expanded version of the column published in the August 5 edition of The Moscow Times.

It's easy to forget sometimes – amidst all the lofty talk of geopolitics, of apocalyptic clashes between good and evil, of terror, liberty, security and God – that the war on Iraq is "largely a matter of loot," as Kasper Gutman so aptly described the Crusades in that seminal treatise on human nature, The Maltese Falcon. And nowhere is this more evident than in the festering, oozing imposthume of corruption centered around the Gutman-like figure of Dick Cheney.

Yes, it's once more into the breach with Halliburton, the gargantuan government contractor that still pays Cheney, its former CEO, enormous annual sums in "deferred compensation" and stock options – even while, as "the most powerful vice president in American history," he presides over a White House war council that has steered more than $10 billion in no-bid Iraqi war contracts back to his corporate paymaster. This is rainmaking of monsoon proportions. Indeed, the company's military servicing wing announced a second-quarter profit spike of 284 percent last week – a feast of blood and gravy that will send Cheney's stock options soaring into the stratosphere.

But although Halliburton has already entered the American lexicon as a by-word for rampant cronyism – the butt of a thousand late-night TV jokes and water-cooler witticisms – the true extent of its dense and deadly web of graft is only now emerging, most recently in a remarkable public hearing that revealed some of the corporation's standard business practices in Iraq: fraud, extortion, brutality, pilferage, theft – even serving rotten food to American soldiers in the battle zone.

By piecing together bits from the fiercely-suppressed and censored reports of a few honest Pentagon auditors and investigators, a joint House-Senate minority committee (the Bushist majority refused to take part) has unearthed at least $1.4 billion in fraudulent overcharges and unsourced billing by Cheney's company in Iraq. Testimony from Pentagon whistleblowers, former Halliburton officials and fellow contractors revealed the grim picture of a rogue operation, power-drunk and arrogant, beyond the reach of law, secure in the protection of its White House sugar daddy.

One tale is particularly instructive: Halliburton's strenuous efforts to prevent a company hired by the Iraqis, Lloyd-Owen International, from delivering gasoline into the conquered land from Kuwait for 18 cents a gallon. Why? Because LOI's cost-efficient operation undercuts Halliburton's highway-robbery price of $1.30 a gallon for the exact same service.

But how is Halliburton able to interfere with the sacred process of free enterprise? Well, it seems that Cheney's firm, a private company, has control over the U.S. military checkpoint on the volatile Iraq-Kuwait border, and also has the authority to grant – or withhold – the Pentagon ID cards that are indispensable for contractors operating in Iraq. (Even contractors who, like LOI, are working for the supposedly sovereign Iraqi government.) Halliburton used these powers to block LOI's access to the military crossing – which provides quick, safe delivery of the fuel – for months. Then the game got rougher.

In June, Cheney's boys blackmailed LOI into delivering some construction materials to a Halliburton project in the friendly confines of Fallujah: no delivery, no "golden ticket" Pentagon card, said Halliburton. They neglected to tell LOI that convoys on the route had been repeatedly hit by insurgents in recent days. And sure enough, LOI's delivery trucks were ripped to shreds just outside a Halliburton-operated military base: three men were killed and seven wounded. But that's not all. An email obtained by investigators revealed that Halliburton brass expressly prohibited company employees from offering any assistance to the shattered convoy.

Halliburton extended this milk of human kindness to its food services as well. The firm had to bring in Turkish and Filipino guest workers to feed American soldiers, because the happily liberated Iraqis couldn't be trusted not to blow up their benefactors. The Cheneymen treated these coolies as befitted their lowly station: they packed them into tents with sand floors and no beds, and literally fed them scraps from the garbage. When the peons complained, Halliburton sacked the subcontractor, who had been buying bargain produce and meat from the locals, and hired an American crony to ship in food all the way from Philadelphia.

U.S. soldiers weren't treated much better. Employees testified that Halliburton brass ordered them to serve spoiled and rotten food to soldiers – day in and day out. Meanwhile, Halliburton brass were reserving choice cuts for the big beer-soaked barbecues they threw for themselves two or three times a week. They also billed the taxpayer for 10,000 "ghost meals" a day at a single base: the food was phantom, but the rake-off was real. Meanwhile, any employee who made noises about exposing the fraud to auditors was threatened with transfer to a red-hot fire zone, like Fallujah or Saddam's hometown, Tikrit.

All of this criminal katzenjammer – and much, much more – was authorized at the highest levels, as top procurement brass and Pentagon officials confirmed. Cheney's office kept tabs on Halliburton's bids while Pentagon warlord Don Rumsfeld "violated federal law," the committee noted, by directly intervening in the procurement process to eliminate all possible rivals and make sure Cheney's employer got the guaranteed-profit gig. Rumsfeld's office also removed oversight procedures for the dirty deals, and has ignored repeated warnings from Pentagon auditors about Halliburton's blatant, persistent, pervasive fraud. Instead, the money keeps rolling in: just last month, Don and Dick ladled another $1.75 billion dollop of pork gravy into Halliburton's bowl.

For this they have made a holocaust in the desert sands, sacrificing tens of thousands of innocent lives: for cheap, greasy graft, for grubby pilfering, for the personal profit of Richard B. Cheney and the whole pack of Bushist jackals gorging themselves on blood money.

Chris Floyd
Posted by the author at 12:09 PM

I'm unable to add new material to my regular blog, Empire Burlesque, at www.chris-floyd.com, at the moment. That site is still available for reading, however. In the meantime, I'm using this, the original site, founded 17 years ago.